Locals Know Where to Eat in the Berkshires

We arrived at dusk while there was enough light to sit outside on the wooden deck that backed up against a grassy hill. What looks like the decayed remnant of a hundred year old shed leans perilously to one side. 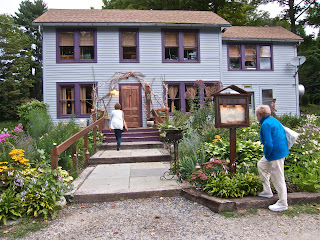 Inside, the restaurant has the cozy feeling of an English road house. The floor to ceiling windows in the dining room open out onto the deck and hill in back.

In the summer, visitors come to the Berkshires in Western Massachusetts to escape the heat and congestion of the city.  Offering opportunities to relax and catch up on your reading, a string of small towns with B&Bs cuts through the expanses of woods and farmlands.

With music at Tanglewood and dance at Jacob's Pillow, historical sites like Edith Wharton's home, the Mount, the Berkshire Botanical Garden and innovative exhibits at MASS MoCa in North Adams, there's plenty to keep you occupied.

In August I visited the area for the first time. Beyond the charms of small New England towns and the pleasure of world class art, the Berkshires also has great chefs who take advantage of good products from local farms.

Chef-owner Dan Smith at John Andrews Restaurant has his own garden so he can supply his kitchen with fresh produce during the summer and fall. After more than two decades in the area, he has close relationships with local farmers who bring him high quality meat, poultry, milk, cheese, produce and honey.

On that trip in August, we had a tasting of chef Smith's menu that included a grilled eggplant with local heirloom tomatoes, creamy mozzarella and a drizzle of basil, 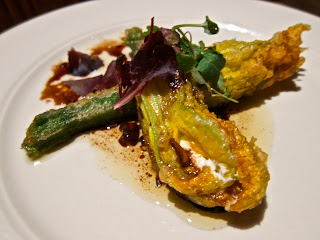 All those dishes were delicious. The creme de la creme was Smith's diver's scallops with a risotto of roast cauliflower, leeks and pancetta. This was no ordinary risotto. This was a risotto without rice.

Chef Smith likes the creaminess of risotto but wanted a side dish that didn't rely on rice for flavor and texture.

There isn't a good reason to call this a "risotto," but I liked the result so I wouldn't deny him his naming rights.

He pared the creamy cauliflower with tender, sweet scallops. I could easily imagine the risotto accompanying grilled halibut, a thick medium-rare bone-in ribeye steak or a roasted chicken breast.

Happily chef Smith was generous enough to send me the recipe so I could make the dish at home.

The dish can be served as an appetizer or entrée. 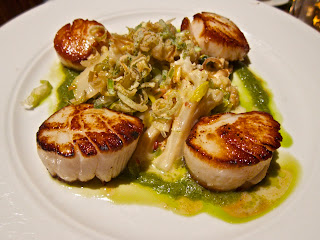 Serves 4 as an entrée

2. Trim cauliflower, leaving the tender florets. Separate the florets and toss in a bowl with garlic, 1/4 cup olive oil and 2 teaspoons sea salt. Spread seasoned cauliflower on a baking sheet. Roast in the oven 30 minutes until cauliflower is tender.

3. Trim and wash scallions, season with 1 teaspoon sea salt and 2 tablespoons olive oil. Char the scallions on a grill or roast in the 400 F degree oven until tender. Let cool, chop up and place in a blender with 3/4 cup olive oil. Makes approximately 1 cup scallion oil. Use half the scallion oil for the recipe. Refrigerate the remainder to use with fish.

4. Slice leeks in half,  length wise, then slice across each half to create 1/2" strips. Rise well in clean water and place in a non-reactive sauce pan, cover with water and add a pinch of sea salt. Cover and simmer for 10 minutes on medium high heat. Stir leeks every couple of minutes. After 10 minutes, remove the lid, reduce the heat to medium and cook leeks until tender and most of the liquid has reduced.

5. In a sauce pan, render the chopped pancetta until brown and crispy. Drain well. Discard the fat. Toss together the pancetta, leeks and roasted cauliflower florets in the sauce pan. Stir in the heavy cream and simmer. Reduce the cream to coat cauliflower, stir in Parmesan and chopped parsley.

6. Heat a large stainless steel or cast iron pan on a medium high flame. Season the scallops with sea salt and sear 1 minute per side.

7. Place 4 scallops on each plate on a bed of cauliflower risotto, drizzle with scallion oil.

Popular posts from this blog

Ready, Set, Go to Havana - But New Regulations Make That More Difficult to Do

Most dramatically, no U.S. citizen may engage in commercial transactions with Cuban military entities. Since all hotels and restaurants are government-owned, the only stays legally allowed are in private homes available for rent.

Known as casa particular, these homes, like Air B&B, can be spartan or comfortable but they are far less available than rooms in hotels.

With this change, the U.S. seeks to put a strangle-hold on the Cuban economy. The situation is similar to what it was during the height of the Cold War, which was when I first visited.

Over almost twenty years, I visited Havana three times, accompanying my wife along with a d…
Post a Comment
Read more

April 12, 2011
Our traveling foodie, David Latt, recently spent time in Austin, Texas during the South by Southwest music, interactive and film festival. Besides watching movies and listening to music, he used his spare time to search out great places to eat.

Austin has a lot going on.
Besides being the state capital, the city has amazing music venues with a great collection of bars and a dynamic food scene.
Austin has it all. Upscale, fine dining restaurants as well as affordable neighborhood hangouts specializing in Mexican, Asian, Indian, French, American cuisine and more barbecue and burger joints than you can shake a stick at.


One way to navigate the diverse food scene is to check out the food trucks.
Encounter a food truck in most cities and they’re pretty utilitarian. Usually the truck is a step van with a window cut along one side where customers order and pick up their food. To eat your meal, you stand on the sidewalk trying not to get food on your clothes.
To find a favorite truck’s location, …
3 comments
Read more

An Island Shrine, a Special Meal and a Unique Museum in Japan's Aichi Prefecture

June 13, 2018
In pursuit of a week-long adventure in Japan’s heartlandShoryudo Region, I sped west from Tokyo on the Tōkaidō Shinkansen. The train’s path followed the Old Tōkaidō Road (the 'eastern sea' road), used for centuries to travel between the governmental capital in Edo (modern Tokyo) and the Imperial capital in Kyoto. I was on my way to Aichi Prefecture which hugs the Pacific coast and offers a rich experience with culture, history, nature and culinary deliciousness.

I settled into my seat on the train, happy to be in Japan where public transportation makes it easy to explore all parts of the island nation. For intercity visits under three hours, I'll always take  the 200+ mph Shinkansen.
Called the "bullet train" for good reason. Stand near railroad tracks as a Shinkansen passes and it feels like a jet on wheels is streaking by. Inside, when I'm sitting in a comfortable seat, reading a book or snacking on a bento box, I forget how fast we're traveling.

David Latt
I've been a television producer for twenty-five years, working on Hill Street Blues (won an Emmy), The Hitchhiker, Bakersfield P.D., Get A Life, EZ Streets, Stir Crazy, Twin Peaks (nominated for a second Emmy) and many others. I’ve co-written half a dozen pilot scripts and through the long hours and stress of dealing with production craziness--bad weather, out of control costs, needy actors, and distressed fellow writers--I cooked. Sometimes after a really difficult week, I’d cook all weekend. Eight, ten hours each day, I’d stand over the cutting board and stove, cooking. Cutting carrots calmed me down and gave me hope again. Other people in my profession took up gambling or drank or went crazy chasing women. Not me. I went home and cooked. In addition to writing for Men Who Like to Cook, I contribute to NY Times Diners Journal, One for the Table, TravelingMom, and Luxury Travel Magazine. Recently I have taken my passion for food on the road to write for Peter Greenberg and NYDailyNews Travel online. I'm very proud of my first eCookbook, "10 Delicious Holiday Recipes," available on Amazon. Blog copyright © 2007-2012